When you walk into Frank Riesinger’s home, the first thing you notice is an entryway table with four newspapers browned with age touting the end of World War II. As you turn into the dining room, the display of newspapers turns into stacks. Stacks, side by side, covering tables and chairs and lining the perimeter of the room.

“I’m missing about 22 days, but that’s it,” he said. “I have all the newspapers of either the Tulsa World or Tulsa Tribune for every day of World War II. On many days I even have both!”

A Tulsan born and raised, Riesinger graduated from Will Rodgers High School in 1943 and then from The University of Tulsa on May 30, 1949, with a bachelor’s degree in Business Administration. “I was born in a home just a couple miles west of TU actually,” Riesinger shared. “My uncle, who graduated from TU in ’29, told me, ‘Frank, you need to ring the bell.’ And I said, ‘What bell?’” Frank’s uncle explained that it is tradition to ring Kendall Bell after graduation, which at that time was in the tower of Kendall Hall.

“And so, I thought to satisfy my uncle, I would ring the bell,” he said. After graduation, Riesinger went to Kendall Hall and climbed the stairs to the top of the structure.

“But when I got up to the bell tower, the door was locked! I thought I better just forget about it,” he said. But he had come that far, so he picked the lock and got access to the room.

“I immediately knew when I went in why it was locked. The biology teacher had loaded the bell tower with guinea pigs. I wandered through the cages, got to the bell and rang it – and then I got the heck out of there because I thought I might be arrested or something,” he chuckled. Riesinger came to TU on the G.I. bill after serving during WWII. At 17, he chose to serve in the U.S. Army Air Corps and started basic training to become a B29 navigator. While waiting for an opening as a navigator, he was assigned to play in the Army band, which had the daily responsibility of retiring the flag at the Yuma Army Air Force Base.

“I have to confess, I cheated,” he said. Every Army Air Corps applicant was required to pass an eye exam. Riesinger knew he would pass – with his right eye. “My right eye is 20/20, so I read the bottom line with my right eye from left to right.” He then covered his right eye to read with his left. He whispers, “Well I had memorized it so I could read it backwards with my left eye, so I passed,” he laughed. “I cheated and got in.” When asked what it means to be a part of The Greatest Generation, “Nothin’,” he replied, “Because we all went. Everybody went; 16 million of us went. They were even drafting fathers.”

Aug. 5, 1945, saw the first atomic bomb dropped on Japan. Riesinger was told on a train from El Paso to Tulsa for furlough. Three days later, the second bomb was dropped. When the Japanese surrendered on Aug. 14, Riesinger remembers ticker tape coming down in downtown Tulsa at 4 p.m. He was at his father’s jewelry shop in the Orpheum Theater building on Fourth Street. Riesinger went out on the street with his 4-year-old brother to celebrate with the rest of city well into the night. 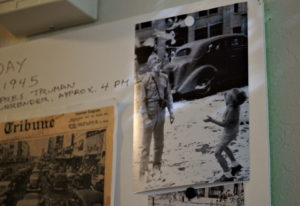 Riesinger was discharged from the service several months later and began working at his father’s jewelry store while in college. He said he didn’t have a lot of campus life because most of the students were veterans and had jobs. “You’re not Joe College when you go back to college after you’ve been in the Army and served.” Riesinger was a member of Phi Beta Kappa and still has the society’s white stole he wore at graduation. Only two other students in his class graduated with that distinction.

“I opened my own jewelry store in Utica Square in ’52. It closed in ’84. We were craftsmen. We made jewelry by hand,” he said. He apprenticed under his father and “then received my business training from TU. I could do the corporate book work, maintain inventory and keep track of buying with my B.S. in business administration.” 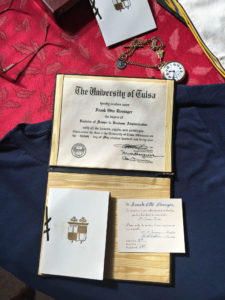 In 1950, Riesinger was attending Yale Avenue Presbyterian Church. One Sunday in June, he was standing outside with his friend and happened to look up. “Tripping up the stairs of our chapel were these two blondes. I popped off to my friend, ‘Hey, I’d sure like to get a date with one of them.’” His friend got a funny look on his face, turned around to him and said, “‘I think that might be arranged, I’m dating one of them.’ He was dating my wife,” Riesinger laughed. “So, he made the date and the next night we went on a double date. I think we dated every night for the next week or two, and before it was over, we had switched dates!”

Barbara Young, who later went by Bobbie, had moved from Oklahoma City to Tulsa a few years earlier. The couple dated on and off from 1950 to 1953. During that time, she became friends with Riesinger’s stepsister. They ended up rooming together at college and his stepsister would periodically update him on Bobbie. “She would say, ‘Frank, you better get busy if you’re interested.’ And I was interested, so when Bobbie came home from college after her freshman year, we started dating again. One day she came into my store in Utica Square. Girls didn’t go after boys at that time. She came in my store and I thought, ‘She’s probably serious.’

“Bobbie looked at me, and I looked at her that day, and that was it,” he said. The couple went on a date every night – and twice on Sundays – for a month before they were engaged. “We got married that fall and were married for 60 heavenly years,” he said. 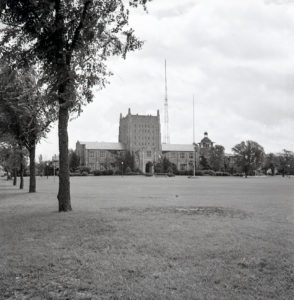 Riesinger will be 93 in August and graduated from TU 70 years ago in May. He recently visited campus, thinking he would ring the bell again to celebrate. He hadn’t been back in years. Looking around, he couldn’t find the old Kendall Hall, not knowing the building had been taken down. Finding the bell in Bayless Plaza, he couldn’t ring it because there wasn’t a rope attached to it at the time.

“Of course, campus was altogether different when I went. We had the U (driveway), which came up by the library. That was it. And then there were just a few buildings around that. It was just a little university,” he said. 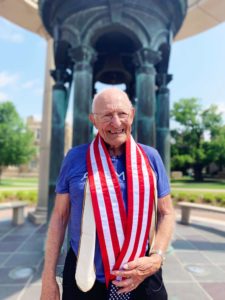 While at the bell on a return visit, Riesinger ran into Larry Wofford (BSBA ’70, MBA ’71), who was then-dean of Collins College of Business. Wofford encouraged him to go over to the Office of Alumni Engagement to see about ringing the bell. Amy Gerald (BA ’99), director of development for the Collins College of Business, heard about Riesinger’s story and coordinated with alumni office to throw Riesinger a bell-ringing celebration.

“Frank would have been happy if we had simply reattached the rope to ring the Kendall Bell, but everyone I spoke with at TU agreed that we wanted to do more. We wanted to celebrate Frank, to recognize him and to toast him, for graduating 70 years ago and for serving our country during WWII. I was inspired by his enthusiasm and his desire to ring the Kendall Bell 70 years after he climbed up Kendall Hall to ring it the first time,” Gerald shared. While at the bell ringing Riesinger said, “I remember having rung the bell and nobody else rang it because nobody else would break in. I never heard of anyone in my class who did. I thought, ‘OK, I rang the bell 70 years ago. I’m going to ring it again just for fun.’ Just for nostalgia, I wanted to ring it again, so I did!

“It’s just thrilling to relive it. It was fun for me, and it’s interesting today to tell the story to you guys. The fact that you all are here makes me feel honored. Thank you.”

He laughed, “Well that’s my story, and I’m gonna stick with it.”

We use cookies on our website to give you the most relevant experience by remembering your preferences and repeat visits. By clicking “Accept”, you consent to the use of ALL the cookies.
Cookie settingsACCEPT
Manage consent

This website uses cookies to improve your experience while you navigate through the website. Out of these, the cookies that are categorized as necessary are stored on your browser as they are essential for the working of basic functionalities of the website. We also use third-party cookies that help us analyze and understand how you use this website. These cookies will be stored in your browser only with your consent. You also have the option to opt-out of these cookies. But opting out of some of these cookies may affect your browsing experience.
Necessary Always Enabled
Necessary cookies are absolutely essential for the website to function properly. This category only includes cookies that ensures basic functionalities and security features of the website. These cookies do not store any personal information.
Non-necessary
Any cookies that may not be particularly necessary for the website to function and is used specifically to collect user personal data via analytics, ads, other embedded contents are termed as non-necessary cookies. It is mandatory to procure user consent prior to running these cookies on your website.
SAVE & ACCEPT