When I learned I would be teaching in Turin, I knew Italy had taken in a large number of refugees from Syria. I was curious if there were any refugee camps nearby that we might visit. I found an active government-funded program called “Il Passo” in Turin run by a group called Diaconia Valdese.

My wife contacted Diaconia Valdese and offered our services while we were in the area. They suggested we teach English lessons to the refugees they served. Through that initiative, we were able to connect with 20 refugees from Syria and African nations. Full-time I’m an Associate Professor of Marketing at The University of Tulsa but had the opportunity to teach at the University of Torino for USAC last summer. When Kristin Mallory, store manager of the Campus Bookstore, heard we were looking for TU items to give to the refugees, she pitched in and donated several hats, shirts, visors and other gear.

Italy has had a fairly open-door policy to refugees. The government has found people decent, shared housing for up to six months in various cities. All the refugees we met want to go back to their homes as soon as it’s safe again. In the meantime, they try to find work in Italy.

My wife paid them a brief return visit earlier this year. They were all so appreciative and happy for the gifts from TU. This young couple escaped from Syria and soon after their departure their home village was bombed by the Islamic State in Iraq and Syria (ISIS). They were both working as mechanical engineers in Syria and are now holding down jobs in food service. 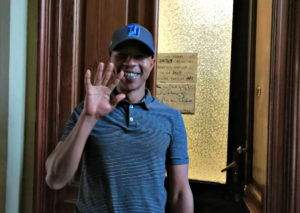 Dialo was working as a journalist in Guinea. He already spoke French, Italian and a local dialect. I’ll never forget during one of our English lessons he told me that to really be free you must learn English. 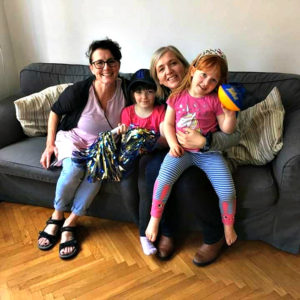 This mom and kids are British. They came to Turin to aid refugees on an ongoing basis across that city.

There were others who received gifts, like Mikaobo and Boba from Mali, who are close to finding work and being self-sufficient in their new country. Everyone was so surprised by the paraphernalia. They kept saying they couldn’t believe people in the United States would think or care about them. All our new friends wore their TU gear with great pride.

Kudos to Kristin and TU spirit!